While large armies engaged in epic battles in the eastern theater of the Civil War, a largely unchronicled story was unfolding along the Mississippi River. Thirty “Special Scouts” under the command of Lieutenant Isaac Newton Earl patrolled the river, gathering information about Confederate troop activity, arresting Rebel smugglers and guerrillas, and opposing anti-Union insurrection. Gordon Olson gives this special unit full book-length treatment for the first time in The Notorious Isaac Earl and His Scouts.

Olson uses new research in assembling his detailed yet very readable account of Earl, a dynamic leader who rose quickly through Union Army ranks to command this elite group. He himself was captured by the Confederates three times and escaped three times, and he developed a strategic — and later romantic — relationship with a Southern woman, Jane O’Neal, who became one of his spies. In keeping the river open for Union Army movement of men and supplies to New Orleans, Earl’s Scouts played an important, heretofore unheralded, role in the Union’s war effort.

Editorial Reviews
Review
Perry D. Jamieson
— author of Death in September: The Antietam Campaign
“Civil War historians have recounted in great detail many of the large, conventional operations of the conflict. Gordon Olson here turns his attention instead to the less often examined subject of irregular warfare. This is a refreshing and fascinating study of a remarkable Civil War leader.”

James M. McPherson
— Pulitzer Prize winner for Battle Cry of Freedom: The Civil War Era
“This account of a unique counterguerrilla unit of Union soldiers led by a daring lieutenant from Wisconsin expands our knowledge about the shadowy war of guerrilla raids, illegal trade, and midnight assassinations in the lower Mississippi Valley. Isaac Earl’s scouts were the forerunners of today’s special operations forces, and their story offers an important perspective on the Civil War.”

Daniel E. Sutherland
— author of A Savage Conflict: The Decisive Role of Guerrillas in the American Civil War
“Gordon Olson significantly broadens our understanding of the guerrilla war with this incisive study of Earl’s ‘special scouts.’ In a fast-paced yet meticulously told story of Union counterguerrilla operations, Olson not only illustrates the geographical breadth of the irregular war but also shows how desperate the North became to eliminate their bushwhacking foes.”

Michael J. Martin
— author of A History of the 4th Wisconsin Infantry and Cavalry in the Civil War
“The Notorious Isaac Earl and His Scouts superbly unveils the mystery surrounding Lieutenant Isaac Earl, the intrepid Scouts he led, and their invaluable contribution to the federal effort in the Civil War’s trans-Mississippi theater. Gordon Olson leaves no stone unturned in his quest to tell the complete story of Earl and his Scouts. . . . This well-written narrative clearly belongs on the shelf of anyone interested in military history.” 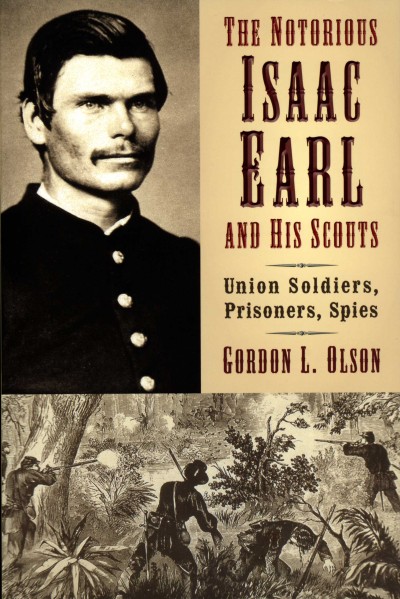 Available for sale from Eerdman Press